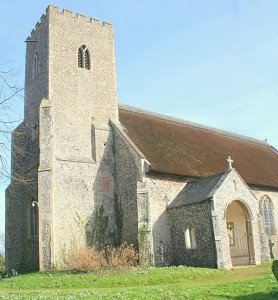 St Margaret’s Church, Paston is a grade 1 listed church built in the early to mid 1300s on the site of an earlier church, on a known pilgrim’s route.

It has a beautiful simplicity. It features two striking 14th Century wall paintings (hopefully to be restored) some Paston family memorials, and some fine 19th and 20th century stained glass.

It’s notable for its association with the Paston family, whose 15th century letters, a thousand pages over some 70 years, famously survived and give a valuable historical insight into how an (admittedly upwardly mobile) family lived from day to day and held on to their lives and their lands through the turmoil of the Wars of the Roses.

Paston is a member of the Trunch Group of Parishes, Norwich Diocese.

Check the times and dates of upcoming services and events.

If you'd like to support our restoration fund, you can donate in the church or by text.