The buttresses on the south side of the nave originally erected when Elizabeth 1 was on the throne, have now been re-built, exactly as they were.  As they were taken down each piece of stone was numbered to show its position so they could be put back in the same place.  The original  flint stones have also been re-used, with some extra, as the originals were hollow inside but they have been re-built solid. This work having been completed the south wall of the nave, which was slightly falling away, is now stable

The builders W S Lusher and Sons have now moved on to the north wall of the nave which is being re pointed, using lime mortar as would originally have been used and allows the walls to “breathe” and dry out.   And guttering is being installed under the thatched roof to take away the rainwater which had been finding it’s way into the stonework.

Then work moves inside for repairs to the chancel roof, the dismantling and rebuilding of Lady Katherine’s memorial, which is in danger of collapse.

And finally, the north wall having dried enough to prevent any further deterioration to the late 14th century wall paintings holding measures to preserve them can be done in early 2014 till a full conservation job can be done. 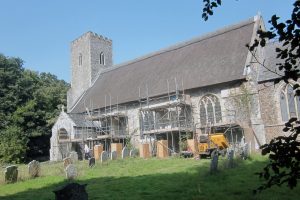