This fine grade 1 listed church was built in the early to mid 1300’s on the site of an earlier church, on a pilgrims’ route between Bromholm Priory (in modern Bacton) and the hostel and chapel which are known to have been at Stow Hill where the windmill now stands.

The Paston family and their letters

It is famous for its association with the Paston family, who lived in the adjoining hall, whose letters in the early 15th century give an insight on the life of an upwardly mobile family during the Wars of the Roses.

The letters started with the wife of Sir William, a Judge with a talent for resolving disputes between noble families, and continued with his son and daughter-in-law. They would make into a good television series with headstrong daughters insisting on marrying the wrong man, sons unhappy with their inheritances and all kinds of tensions.  Despite all that the family as a whole were achieving huge success and in four generations rose from being peasants under the Plantagenet Kings to being holders of high office under the Tudors.

You approach the church from the north, the “wrong” side,  because the first Sir William Paston in the early 15th century diverted the road away from Paston Hall to reduce disturbance to himself and his family   This angered the villagers who demolished the wall he had built across the old road, which he then re-built and the family had insults hurled at them (all of which is described in the letters).

Today however there is the benefit that as one rounds the church tower to the entrance one finds a wonderfully peaceful bit of churchyard away from the traffic. Opposite the entrance the old pre 15th century road can still be seen between churchyard and field, and a thatched lych gate, which is probably where the original entrance was from the old road. 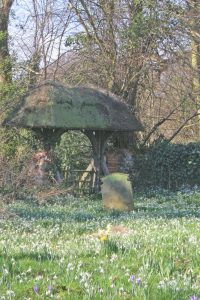 As you enter the church the first thing you see facing you is a late 14th century wall painting of St Christopher crossing a river with the Christ Child on his shoulder. At his feet is the water and a fish. The legend says that he was a big strong man but nearly brought down by the weight of the child who was carrying the sins of the world. Seeing St Christopher was reputed to bring good luck and protection for the rest of the day.

The other painting further down the church towards the altar has been identified as a morality tale showing three hunting kings or noblemen coming upon three skeletons hanging from a tree, showing how everyone ends up. Below that scene is just visible a soul being weighed in a scale (the soul being represented by a naked figure with hands clasped in prayer).

Then in November 2013, during the repair works some further wall paintings have emerged above the chancel arch, an angel with curly hair swinging a sensor, and symbols of the Passion.  These have been assessed by Dr Andrea Kirkham and are later in date than the other paintings,  very rare if not unique – the symbols are to be found carved in wood or stone but ours are the only representation in a wall painting.

Next  moving up towards the altar  you pass through the rood screen, which is probably 15th century. Note the spy holes, and the remains of some paintings on the panels which had probably been of the twelve apostles, clearly deliberately obliterated

The tombs and memorials

On your left in chancel are some early 17th century memorials to Paston family members by Nicholas Stone, foremost sculptor of his age, one of them, that of Lady Katherine Paston, with an inscription by John Donne the Elizabethan/Jacobean poet better known for his romantic poetry.

Round the altar are some table tombs, undoubtedly of the Paston family, one of which is likely to be to be that of John Paston – Sir William’s son – but nobody really knows.

And there are some fine 19th and early 20th century stained glass windows. The memorial window on the south walls to Michael Mack who went down with his ship in a naval action in 1917.  This pictures a warship and swans flying over the sea.

Look at the pew ends – one features the Paston family crest, a Griffon, and another a devil sticking out its tongue.

We hope as you wander round the church you will feel something left behind by those who have been there over the last 800 years with the same sort of joys, sadnesses and concerns as us 21st century visitors.

More information about the history of St Margar 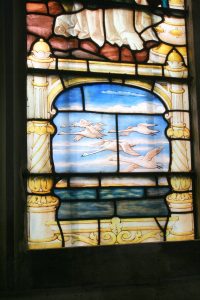 et’s Church can be found on http://www.norfolkchurches.co.uk/.